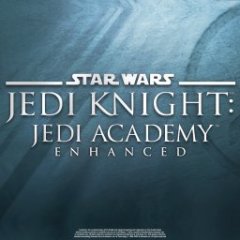 Jedi Academy: Enhanced is a mod for Jedi Academy Single Player which adds features and improvements to the core experience of the base game like RGB sabers, saber customization, saber holstering, new force powers, some extra character customization options using “head swapping”, optionally allows you to use AJL's SFX Sabers, and more. Full list of features and changes below.

This is for new or old players who want to play through the single player story of Jedi Academy with some enhancements and new features without completely overhauling the core vision of the game.

This was intended to be an even bigger collection of mods that improve it, and with many more features, but progress is slow. We release when we feel there's big enough of a change or addition. If you are interested in helping with the project, check our forum.

It's based on OpenJK (so the code is released under the GPL and available at [https://github.com/JKEnhanced/OpenJK/]) and a slightly modified version (for SP) of AJL's SFX Saber code. It also uses Open Jedi Project code for TrueView.

Unfinished features, only use if testing:

If you've installed an earlier version (from when this was just called SP Customization Mod or 1.0), it'd probably best to uninstall the old version.

If you're using a Mac, you should put "Jedi Academy: Enhanced" alongside your regular Jedi Academy base folder - depending on your version the base folder might be hidden inside the original game's application bundle or in /Library/Application Support/Steam/steamapps/common/Jedi Academy/

The code and menu files are GPL. The relevant GPL license is included in the "readmes” folder. For completeness the Open Jedi Project readme is included although permission has been granted to use the TrueView code under the GPL.

Support for this mod will be limited. Please post questions in the subforum on JKHub.

(old saves not compatible with this version!)
- Added eezstreet's AI workshop
- Added g_UseIdleAnims to disable/enable idle animations
- Removed black bars from cutscenes so scenes aren't half obstructed on widescreen resolutions
- Added g_noIgniteTwirl to disable the twirl animation on ignition (like MP)
- Added cg_ignitionspeed ton control how fast or slow the saber blade ignites
- added a COMPLETE button to the saber builder UI to close it
- r_mode -2 is now default at launch to be fullscreen at native resolution (set to -1 to go back to windowed mode)
- Added cheat menu in the in-game pause menu
- Added in-game character and saber edit menu in the in-game pause menu
- Added in-game photo mode menu. The binding currently doesn't work from the CONTROLS menu, it needs to be added manually in the console: bind [key] uimenu camsp
- Toggle between pistols when you have the Bryar and DL-44 with the weapon2 button
- Replaced the old E-5 blaster with KhorneSyrup's new version
- Removed Force Blinding bind in the menu since it is not ready for use
- replaced DL-44 with AshuraDX's HD DL-44
- Added Kahn's UltimateWeapons mod as an optional PK3 with some revisions (removed saber effects, replaced some explosions with the smaller efx)
- Added Plasma's saber pack as an optional PK3 with removal of a lot of duplicates to make the list easier to navigate
- Added *holsterorigin tags to vanilla sabers and many of Plasma's sabers to work better with holstering
- Added HapSlash's stormtrooper model to replace the vanilla model
- Added Toshi's Luke to replace the vanilla model
- Added r_ratioFix for full native widescreen support for the HUD and menus
- Added new splash screen and menu logo Please note this project is still a heavy work in progress. There are bugs, glitches, and unfinished features still in v1.1. If you need to report a bug that isn't listed here, please do so.