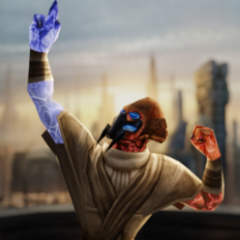 A map that started in September of 2008 by the clan Jedi of Freedom, {JoF}. It is meant as a tribute to a group that went by the name of the "Secret Mission Center" between 2007 and 2014.

This map had a lot of authors and was a collaboration of many people, the majority with practically no map experience and very few with actual experience. Regardless, the saying "too many cooks spoil the broth" may be applied.

The map is FAR from perfect and there are known bugs and glitches that may be revised for a V3 version, one day.
However we put everything into getting it in a releasing state and just pushed for this project that was seeming like a never ending one. What we have is the end result of that and we are truly happy to have something to show for it.

Furthermore the file size is rather large due to the fact that textures and shaders have not been revised and mostly just thrown together.
There are also two secrets in the map. One is located in Shree's office (the office with the rancor statue). I will be pretty vague about that one because its epic.
The other is a hidden button that opens a locked door next to the statue inside the library.

Other editors may NOT use this map as base for other maps, using reverse decompile methods.

If you want the .MAP file for some reason, contact 'Aldro Koon' at our forums over at www.jofacademy.eu -> forums.