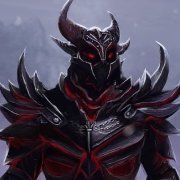 INSTALLATION INSTRUCTIONS: place the zz_zov.pk3 file in your C:\programfiles\lucasarts\jediacademy\gamedata\base directory.

Proudly announcing Darth Zovirex. He is a custom character which is non-canon to Star Wars or anything else. I actually got the
idea of making this from watching Yao Gamers on YouTube. After they made videos with my Starstrider mod, I started to enjoy their
Jedi Academy videos more and more. Check out their channel if you like all things Star Wars:
https://www.youtube.com/channel/UC1N11jE4F0AIQ27hL8YOxWg/videos

I must give a very special thanks to Scott Rose. He is the voice of this character. I have edited the pitch of his voice in Audacity
to match the darkness of the character. Here you can check out his website:
http://bigbadvoice.com/

If you would like him to work with you on a project you can contact him by his email:
scott@bigbadvoice.com

This character is the first of its kind to wield a cross-guarded staff lightsaber..

.. which makes some serious damage in duels!

There are two versions of Darth Zovirex, one with his hood, and one without his hood.

The eyes of Darth Zovirex will look familiar to some - and it should, I gave him the eyes of Sauron from The Lord of the Rings!

BACKGROUND:
Darth Zovirex is meant to be the apprentice of Starstrider who turned to the dark side after the death of his master Starstrider
in the Clone Wars by the hands of Darth Vader (pre-suit) during the execution of Order 66. Zovirex, in his fury went on a rampage,
slaughtering Clone Troopers left and right. He eventually faced Darth Vader, who was viewing security footage of Starstrider with
many different apprentices who Starstrider never made into masters.

Zovirex saw this and was enraged by this, so he proceeded to unleash his fury on Darth Vader. The fight ended badly, Zovirex had his
lightsaber sliced in half by Darth Vader, and as a consequence of his blind fury, Darth Vader cut out Zovirex's eyes with his lightsaber,
making him literally blind. Darth Vader preached as to how blinded Jedi had become to their morals and their "religion", but eventually
reconciled with Zovirex, telling Zovirex that he too, was once blinded and was never made a master by the Jedi council.

Darth Vader reluctantly chose to help Zovirex to regain his vision by making him see all that was previously blind and oblivious to him,
taking Zovirex as his first apprentice. Zovirex had since done various missions alongside Darth Vader together with the guidance of Darth
Sidious, to attain his master status and ultimately master all of his force abilities. Impressed by the dedication and evolution of Zovirex,
Darth Sidious taught Zovirex the ability of dark foresight.

Zovirex mastered this ability and regained his vision, but he only saw everything on fire, as he could only ever see the power of the
dark side, which upon viewing turned his eyes into pure fire. Light became too bright for Zovirex, so he mostly used a hood on bright
planets. After Zovirex had fulfilled his usefullness to both Darth Vader and Darth Sidious, Darth Zovirex spent most of his time on
Coruscant, mainly due to the dark environment which suited his eyes more than any bright planet could.

He befriended Bounty Hunters and made a life trading through the Black Market and killing various targets for their bountys. He became
the only "Sith Bounty Hunter" on Coruscant that worked together with many infamous Bounty Hunters including Boba Fett and IG-88. On his
various missions, Zovirex traversed through many ancient Sith Temples hidden in obscure locations on distant planets where targets fled
from the Republic and from various Cartels on Coruscant.

Inside these ancient Sith temples, Zovirex found and reforged both an ancient set of Sith greaves as his new armor, and an ancent Sith
cross-guarded staff as his new saber using Mandalorian Iron. These new items made his missions much easier to execute, since Mandalorian
Iron cannot be so easily cut by a saber blade or damaged by blaster fire.

EXTRA/THOUGHTS:
I'm starting to enjoy making custom characters a lot more than I thought. It's especially nice to work with talented voice actors to really
put that extra life into the character. Both of my custom characters -- Starstrider & Darth Zovirex -- are mostly of my own thought, but are
influenced by other Star Wars fans and other peoples' work. Starstrider was actually a community effort since a JKHub member @therfiles gave
Starstrider his name! It's great to bring these ideas to life and I feel it is so much more creative than to make a pre-existing character.
I really hope you have as much fun playing with this character as I have had creating it!

BUGS: None that I know about.

COMMENTS: Download and enjoy. note that you must have JKA installed in order to use this mod.