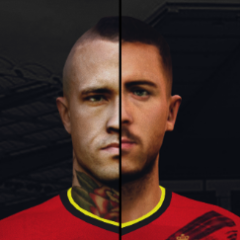 
JoFBall is an upgraded version of Kyleball (original idea by ZantuS) where two teams contest for the ball by using their saber to score goals.

JoFBall is a popular event for the JKA clan ‘Jedi of Freedom’. Events are regularly held on the {JoF}Public Server. JoF members have the privilege to participate in the yearly JoFBall tournaments and have a chance to compete for the Striker title.

The {JoF}Ball.pk3 is a bundle consisting of the following maps:

‘JoFBall’ is the first custom map and upgrade for the original Kyleball. This map features a central hub with teleports leading to 3 unique maps. Each map is different in size and has a different theme. Arena should be played 3v3, Streets 4v4 and Stadium 6v6.

‘JoFBall_tournament’ features a central hub with teleports leading to three identical Arena’s. In comparison to its predecessor, the arena has an upgraded look, substitution area (dug-out) and spectator room.
Thanks to built-in triggers (admin room), the host can simultaneously initiate the start/stop of a round across all three arena’s. In addition to this, in-game messages are displayed for players to keep track of time.

‘JoFBall skillgames’ is a map which focuses on individual improvement presented in a set of fun and challenging minigames. Thanks to built-in triggers, the map allows repetitive practice in the core mechanics such as passing, shooting and keeping.
Each minigame is supported with a tutorial and there is a distinction between basic and advanced to make sure everyone, regardless of skill, can play.


JoFBall is designed to run on any JA+ server and requires the below server settings to work as intended.


Installation
Just put the pk3 in GameData\base in your game directory.

Write /jofballon in the console to load the 'JoFBall_skillgames' map and simulate the server settings in local Multiplayer.

Final words
JoFBall is a project that we have been working on since late 2019. We hope you enjoy this map as much as we do!
For any questions, feel free to contact us on discord PreFX#4386 and/or Weske#6740 or visit the {JoF}Public Server.

There are no reviews to display.