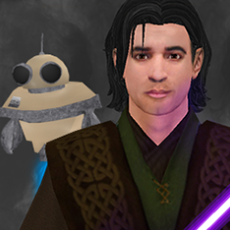 This compilation of models, and skins that go alongside of them, began several years ago for the JEDI Role-Playing community (www.jediholo.net). Within the pk3, are the various outfits of the character Sirius Invictus as well as those of secondary characters that I have utilized within the RP realm during those aforementioned years. Custom personal droid, custom High Republic Jedi Outfit, a human female kitbash/retexture, a semi-custom semi-kitbashed Nelvaan character, a custom sphere-shaped holocron. With a huge amount of the things mentioned having custom texturing.

The crowning jewels of it all, at least in my own mind, are some details such as the chronometer the character sports, complete with its own shadering and animation, as well as the fully shadered and animated starmap that can be toggled on (either in front of the model, above its wrist, or the starmap can -be- the model. In which case you spawn it wherever you wish to set it on a scene for RP purposes).

I hope it helps people dissecting it to learn more things about the wonderful things one can achieve with photoshop, blender and ingame testing. At the very least, spark some creativity or provide some assets to people seeking them as I once did and had next to none.