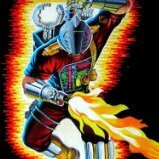 By B.A.T.,
February 11 in Introductions