The mod originally started off as "Harry Potter and the Battle of Hogwarts", a discontinued single player mod by therfiles. While the mod had similar hopes as the Harry Potter Mod, the developer lacked the motivation to continue the project alone. However, afiNity later contacted therfiles regarding the "dead" mod. The two decided to collaborate on a new Harry Potter mod, and the Harry Potter Mod was born.

Using unreleased assets from "Harry Potter and the Battle of Hogwarts", the team was able to create exciting new features, like dialogue menus and combat spells. The team also received assets from Blastech and AHadley, core members of an old Harry Potter multi player mod, based off of The Open Jedi Project. The team benefited from Blastech's beautifully crafted effects and GFX art, and various other resources. Turquoise Dragon has also joined the team and is making maps for the team, while Magyk creates beautiful textures. 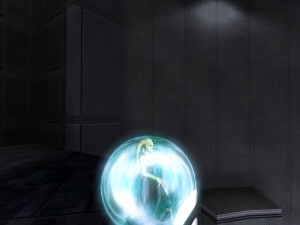 A screenshot showcasing Protego, one of the many new spells in the mod

The mod promises many game play changes. Here is a list from the mod's forums:

The mod team also boasts other features, like a working broom and completely new "weapons".

Instead of releasing minor updates frequently, the team has elected to release less frequent "development diaries", which showcase some of the mod's progress. An example of these diaries can be found here[1].