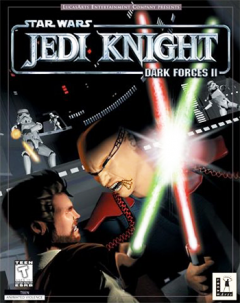 Dark Forces II: Jedi Knight is a first person shooter/third person action game released in September 1997. Set after the events in Return of the Jedi the game continues the story of Kyle Katarn, as he tries to learn the truth behind his father's death after the events of Dark Forces.

Since the destruction of the second Death Star, the Rebel Alliance has begun the difficult process of building the New Republic.

Seizing the opportunity for control of the galaxy, new rival armies arise. The most dangerous of these are the Dark Jedi. Their leader, Jerec, seeks the legendary Valley of the Jedi.

Within this lost battleground he will find untold power to destroy peace and justice in the galaxy.... 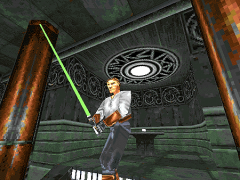 The game starts with a New Republic Tantive cruiser, chased by a large Star Destroyer. The few survivors from the ship are taken to the bridge of the Imperial vessel, where seven Dark Jedi - Jerec, Sariss, Boc, Maw, Yun, Gorc and Pic - gather to question the Jedi Qu Rahn. Jerec seeks the location of the Valley of the Jedi, which is known to the prisoner. Even though Rahn denies it, Jerec manages to extract the information from him and moments later kill the Jedi, but not before he would duel the other Dark Acolytes, even leaving one of them without legs.

Kyle Katarn continues to serve the New Republic as their agent after the Empire is destroyed. He travels to Nar Shaddaa to meet with 8T88, a information droid, who knows what truly happened to Kyle's father on Sulon years ago. He revels, that it was a Dark Jedi Jerec, who personally executed Morgan Katarn, who now seeks the Emperor's title for himself. Katarn wants to learn more, but the droid suddenly betrays him, setting two bounty hunters against the agents. 8T88 also keeps Morgan's disc, found on Sulon, with him, even though he was unable to decipher it for any valuable information.

After dealing with the thugs, Kyle follows '88 through the streets of Nar Shaddaa, eventually catching up with him at the landing platform. The droid tries to escape, but his hand holding the disc is blaster out by Kyle. 8T88 then escapes and a TIE bomber comes to kill the agent. He is rescued this time by his old friend and co-pilot Jan Ors, who arrives just in time in Moldy Crow. Kyle decides to find the disc first and then go to Sulon.

His father's house was ravaged years ago, and now a group of Dark Jedi, led by Sariss remove the old ceiling plates in Morgan's workshop - these are actually the parts of an old map to the Valley of the Jedi, sought by Jerec. As they leave in a shuttle, Kyle fights against many Grave Tuskens, put there to secure the house from intruders by Maw. Having explored the old house Kyle finds their family droid WeeGee, made by Morgan many years ago. This droid is the only one to show the message from Morgan's disc. Kyle's father reveals, that the map to the Valley is embedded in the ceiling and that Qu Rahn, their friend, was the only one keeping this secret from falling into the wrong hands. WeeGee then presents Kyle with Rahn's green lightsaber. 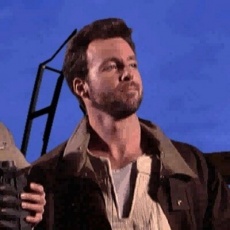 Jan extracts Kyle from the old irrigation channel, which lead from his father's home towards the capital. 8T88 is believed to be staying in Barons Hed, where he deciphers the plates from Katarn's estate. These are then transformed into a star map, indicating the location of the Valley on the planet Ruusan. Jerec and Sariss then prepare their Star Destroyer for leaving from Sulon soon. Kyle makes his way into the city, ruined by the Empire, while the streets are occupied by many thugs. In the centre of Barons Hed lies a large Palace of Jerec, where Kyle intends to find 8T88. The droid however magaes to escape again, leaving Katarn to fight the youngest of Jerec's minions - Dark Jedi Yun. He is defeated however and leaves the battle badly wounded by Kyle.

Through the fuel station outside Barons Hed Katarn makes his way to Sulon's Star, a large cargo vessel, prepared to go to Ruusan. 8T88 also arrives there to meet up with Gorc and Pic, who were supposed to present the droid with a "well-deserved payment". Aboard this ship Kyle has to engage in a duel both of these "Sith brothers", who attack him with two different battle styles, with Gorc being a huge and hulking beast and Pic small and quick as lightning.

After the defeat of the two Dark Jedi, Kyle takes 8T88's head with him back to Sulon to find a safe way to get to Ruusan as well. Together with Jan they arrive not far from the Imperial facility, built as part of preparations of the Valley for Jerec. Katarn then make the way though many canyons and Imperial installation, fighting off stormtroopers, Imperials and AT-ST eventually dueling Maw, a Dark Jedi struck by Rahn, who is now using a hover platform to move around. Defeated he taunts Katarn, describing the details of his father's death in the hands of Dark Jedi. As Kyle strikes the opponent with a lightsaber, Jerec and his followers arrive, having captured Jan Ors.

After a few personal introductions, Jerec uses Force Push to throw Kyle of the platform to the Sulon's Star, which then begins it long fall down into the canyon. Katarn has about five minutes to find Moldy Crow and leave the ship before its destruction. However the blast is so heavy, that Kyle crash lands nearby soon to be approached by Sariss, Boc and Yun. The creepy Twi'Lek taunts the injured Jedi, destroying his saber with a stone and then leaves, as Sariss prepares to execute Kyle. However much to her surprise Yun steps in, claiming a true Jedi deserves a battle and dies from a strike from Sariss.

Kyle defeats Sariss near the deformed remains of Sulon's Star and later enters the Valley of Jedi, eliminating many Imperials and solving several ancient puzzles. Jerec has already entered the core of the main hall, bathing in Force powers, while Boc duels Boc. When the Twi'Lek is dead, Jerec re-emerges as a very powerful Force User ready to conquer the Galaxy with only Kyle on his way. The duel is long, as Jerec often returns to the central chamber to replenish his strength. When Jerec is badly injured and prepares to face his fate - he still believes he can win over Katarn and taunts the young Jedi by reminding of his role in Kyle's father's death, Kyle offers the Dark Jedi one last chance and kills him in this very last duel.

The Player can pursue a different path in the game - by killing the innocent people and developing Dark Force powers. At a certain moment in the game, Kyle would have to make a choice - when Jan Ors is captured by Jerec, instead of turning the lightsaber off, Kyle slaughters his former friend and is even pushed by Jerec with the Force into the Sulon's Star. In this case the mission of escaping the falling ship would be titled "Into the Dark Side". The next mission would also differ from the original - instead of Sariss, Kyle would have to fight Dark Jedi Yun, again.

The duel with Jerec at the Valley would also result in Kyle embracing the Dark Side of the Force and use the powers of the Valley to conquer the Galaxy. The final scene would show Imperial Centre, as an Imperial Shuttle approaches a large Palace, which show Kyle accompanied by Sariss, who informs him of an uprising on Danuta. Upon giving her orders on destroying the rebels painfully, Kyle as the new Emperor takes a seat in his thrown room and replays the old holovideo of him with his father, which is then crushed with much hatred.

Dark Forces II was well received by fans, praising the game for good plot, interesting gameplay and a chance to wield a lightsaber, a possibility longed for by many since Dark Forces video game. The game was also unique in a sense, that it had two different endings - for the Ligth and Dark Sides of the Force, as well as included Multiplayer, allowing the players to challenge each other online.

The popularity of the game made it possible for a sequel (actually an add-on) to be released with a better version of the engine - Mysteries of the Sith, which allowed to play both as Kyle Katarn and Mara Jade, another character from EU. It introduced new missions and weapons, as well as enemies and allowed the Players to throw their lightsabers into enemies.