Tavion Axmis, better known as Tavion is one of the villains in Jedi Outcast and a major antagonist in Jedi Academy.

Tavion Axmis was a female Force-user and the only apprentice of the fallen Jedi Desann. Together they tried to create an army of Reborn warriors in order to defeat the Jedi Order as part of the Empire Reborn plan, made by Lord Hethrir. Her life before dealings with the Dark Jedi and later the Sith cult is unknown, though her garments and tattoos suggest, she might have been a Force user native to the planet of Dathomir, though this has never been truly revealed.

Tavion Axmis is present on Artus Prime together with her master, when they capture Kyle Katarn's co-pilot Jan Ors. Seeing that before them is the former Jedi Knight Katarn himself, Desann uses this opportunity to find the Valley of the Jedi - by making him believe, that his apprentice Tavion executed Jan aboard the Shuttle, while Desann would defeat Kyle outside.

As foreseen by Desann, Kyle would travel to Ruusan - an opportunity used by Tavion and her master to create an army of Reborn warriors, as well as to enhance their own powers through the powers of the Valley.

Axmis later encounters Katarn on Bespin, as he investigates the presence of mercenaries and Imperials in Cloud City. After all the enemies are killed, Kyle confronts Tavion, who partly reveals their intentions - that Desann knew how to act after Jan's execution and that a legion of these warriors were created to destroy the Jedi Order and the New Republic, bringing the new era of Desann. An intense and long duel would then take place on Bespin platform, in which Kyle comes out victorious. It seems he would kill Tavion, as he uses Force choke to lift her above ground and moments later - above the dark emptiness of Bespin streets. Tavion then - probably out of fear for her life - confesses, that Jan Ors is still alive and kept as a prisoner in the Leniko belt. Kyle then spares her life and take a cargo ship to get to the Imperial installation, leaving Tavion on her own. 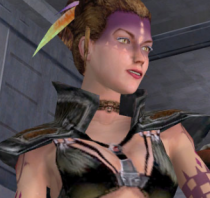 Many years later Kyle Katarn would meet Tavion again. Since the defeat of Desann she seems to have thought through a plan of destroying the Jedi and avenging her fall on Bespin. Her first moves would be spotted by a young Force User Jaden Korr, soon to become an apprentice to Katarn together with Rosh Penin. The two are relatively close to the Massassii Temple on Yavin IV after crash-landing, where Tavion and her two twin Reborn warriors are conducting a ritual of sucking the energy out of the dark presence of these ruins. Jaden would lose conscience, when hit by the light from the strange scepter and would only remember to have seen three people.

Some time later, the group would be recognized as the Disciples of Ragnos, though the true leader would be unknown, except that Jaden encountered one of the Dark Jedi commanders - Alora, who seems to be following someone's orders. The activities of the cultists couldn't be ignored, as they take place in multiple places of the Galaxy at once - something that additionally leads Luke Skywalker to believe, that the Cult is using his old journal with coordinates on multiple Force-affiliated places like Dagobah and Chanrdilla, actually stolen by Alora during the ritual on Yavin IV.

Tavion reveals her involvement soon after Rosh Penin disappearance on one of the missions. Seduced by the Dark Side he would be aiding the Disciples of Ragnos to gain power from the old Darth Vader's chamber on Vjun. While Jaden manages to defeat the Reborn masters and Rosh, Tavion soon arrives to meet Kyle as she intended and crushes the ceiling upon him and his student. She would then flee the old Palace together with Rosh and the scepter with necessary powers.

Further investigation shows, that Tavion acquired the scepter some time ago from a merchant, which she killed afterwards. Her many followers - the Cultists - gained powers from this Sith artifact, and that the final goal is eventually to resurrect the ancient Sith spirit of Marka Ragnos. With this information Luke gathers all the Jedi to begin their mission to Korriban, a burial world of ancient Sith. Jaden would arrive some time after the fight between the Jedi Order and the Cultists broke out, and has to fight multiple Dark Side followers, while making the way to Marka Ragnos' tomb.

There Tavion has already prepared the scepter to be used to resurrect Marka Ragnos, but before that she engages Jaden in a duel, using both her lightsaber and the scepter to bring down her opponent. Struck down however Axmis would still intend to complete her mission - with Force Jump she reaches the statue of the Sith Lord and strucks it with the empowered scepter, thus releasing the evil spirit. Marka Ragnos, seeing the Jedi, uses the body of Tavion to fight Jaden with his Sith sword, hidden within the scepter. The duel then would continue between Korr and the possessed Axmis, until even in this form she would be defeated once again with the spirit leaving the world of the living forever.

Should the Player choose to follow the Dark Side in JA, Tavion would still be defeated, but brutally killed before a resurrection is attempted. Jaden then would fight Kyle instead and after the defeat of the old master, leave the tomb, collapsing the ceiling upon Katarn and taking control of the Remnant forces.

Tavion's JO model has served as the principal base for most of the female skins for Jedi Outcast video game, being used to create multiple characters both from Star Wars and other franchises (like X-Men). One of such reskins was specifically made for the Nina mod for the character of Nina Delenda, who according to its author was a sister of Tavion as well as clone. The almost unchanged Tavion model is used for Athena heroine in the Colosseum mod.

For JA a new model was made with a matured Tavion with similar tattoos and almost the same costume. This model would be used as Dathomiri witch for the Wild Force modification.

Both in JO and JA she is always known simply as Tavion, her surname has been added only in the Holocron continuity database, originally used internally by Lucas Licensing as a list of characters, planets, events, etc in Star Wars.

In both games Tavion is voiced by Kath Soucie, the actress also involved in other Star Wars projects such as The Clone Wars (Mon Mothma, Mina Bonteri) and Star Wars Rebels (Minister Maketh Tua).