Rosh Penin is one of the secondary characters in Jedi Knight: Jedi Academy, where he and Jaden Korr are Jedi apprentices at the Jedi Academy on Yavin 4, under the guidance of Kyle Katarn.

Rosh Penin appears in the beginning, where he is seen sitting next to Jaden Korr in a shuttle with students on their way to Luke Skywalker's Jedi Academy on Yavin 4. The young man is a little nervous and anxious at the same time, as the transport is approaching the final destination. Rosh tries to talk about his thoughts on this to Jaden, also noticing the latter's lightsaber. Some moments after that the transport is shot down by a blast from the forests, thus making the ship land not far from one of the Massassi temples.

Rosh and Jaden are then separated from the rest of the group, trying to find their own way to the Academy. Fighting off some howlers, the two eventually find stormtroopers and a strange dark side Force user. Having defeated him, Jaden then walks to the temple to see, that a trio of strange figures is using some sort of energy, only to be knocked unconscious a moment later. 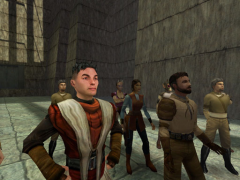 Rosh, along with other students, is introduced to the Jedi Academy by Luke Skywalker.

Other Jedi arrive at the Temple soon, with Rosh and Jaden meeting Luke Skywalker and Kyle Katarn for the first time. After this incident both are assigned to Katarn as his students at the academy. Before beginning their adventures, the two are taken by Kyle to a training facility nearby. While Kyle explains some aspects of the trials, Rosh believes this is sort of competition between the two and even activates a training droid to slow down Jaden. Upon completing all the tasks, Kyle summons both of his students, criticising Penin for such a childish act, which could end up tragically for Korr. While Jaden feels angry with his Jedi colleague, the two eventually reconcile and begin their first missions. 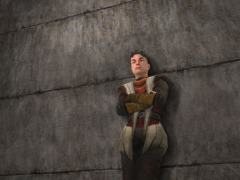 Rosh feels being held back by Kyle Katarn's training.

After completing a few operations Jaden returns to Yavin 4 to see Rosh discussing his latest activities with another fellow Jedi. He actually complaints for not being able to show his full potential.

As the investigation into the deeds of the new threat – the Disciples of Ragnos – continues, Rosh is sent on his own mission to Byss. It is revealed later, that he was captured by the Disciples and was afraid, they would kill him, but in the end he followed the dark side of the Force and joined their forces at the side of Tavion, their leader.

Jaden later finds Rosh, being completely driven by the dark side, during his operation to explore Vjun, where the two duel in one of the hallways, however the intervention of Tavion herself prevents Korr and Katarn from stopping the cult from sucking away all the energy of the Bast Castle. This wouldn't be the last encounter with Rosh though, as he would send a distress signal to Kyle, while staying on Taspir III. Jaden and Kyle travel there to find the fallen Jedi, and even though Korr was angry with Penin, he was able to forgive his fallen friend. This was the time when Alora would attack the two, cutting off Rosh's arm and dueling Jaden until her death.

After the defeat of Tavion on Korriban, Jaden and Kyle would come to check on Rosh, who was staying in medbay, where he got a new prosthetic arm. It is implied the two would continue their adventures during the many new missions for the Jedi Order.

Rosh Penin is one of the characters who can be killed, should the Player choose the dark side on Taspir III. If the Player doesn't turn off his lightsaber, a new cutscene shows Jaden stabbing Rosh with the saber. Rosh's last words in this case would be for Kyle, saying that both of his students had failed him.