The sabering system of vanilla Jedi Knight: Jedi Academy allows players to utilize mouse movement while their saber is active to adjust the direction and velocity of the swing. A saber is considered active during a swing animation, as this is when they can deal attack damage. Such a degree of freedom opens up an additional technical dimension to saber combat.

Due to the way damage is calculated by the game's engine, such techniques can greatly increase the damage inflicted by a saber, so much so that it can be reasonably questioned whether said techniques were intended by the developers. Whatever the case may be, analogous to strafe jumping in Quake Live or bunny hopping in Counter-Strike, these mouse movement techniques in JKA have become part and parcel of the mainstream way of playing the game and their removal unthinkable from the competitive community.

The most widely used mouse movement technique is the "wiggle". During a wiggle, the player quickly moves their mouse back and forth during the swing animation. This can be used to great effect with all swings, all saber types and all saber stances, although it most notably increases the efficiency of the slow red stance by sidestepping its only weakness, namely its lack of speed compared to the other stances, and capitalizing on its greatest strength, namely the effective range of its swings. Thus a wiggled red swing becomes especially powerful.

The objective of wiggling is threefold: First, the velocity of the swing is increased by moving the mouse very quickly, which on the one hand increases the chances of breaking through the opponent's defenses and landing a hit and on the other hand increases the damage dealt by the swing. Second, by moving the saber back and forth, the player has the chance to hit the opponent multiple times in a row with the same swing, increasing the efficiency of the swing and multiplying the damage done. Third, a wiggled swing has a much larger area of effect compared to a standard swing, thereby increasing the chance of landing a hit on the opponent without having to put much effort into aiming the saber at the opponent's character.

To maximize the efficiency of wiggling, most competitive players either use a high general mouse sensitivity or a high m_yaw value to increase their mouse's horizontal responsiveness. If done right, a single wiggled red swing can do over 200 points of damage and instantly kill the opponent, even with a full health and shield bar. 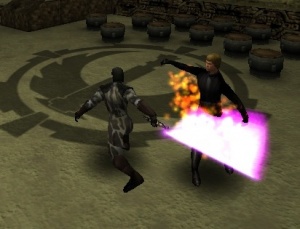 A player performing an aimed swing.

A less effective and therefore also less common technique compared to the wiggle is called "aiming", in some circles also known as "extensions". An aimed swing is done by moving the mouse in such a way that the saber stays pointed in the opponent's direction. This technique is most commonly performed with red stance swings due to their slowness. Faster sabering stances make it more difficult if not impossible to effectively aim the saber at the opponent during a swing, although with practice it can be effectively done with the yellow stance as well.

The point of aiming is to extend the duration of the aimed swing's effectiveness. Normal swings are only effective at one specific moment, namely during the contact of the saber with the character of the opponent, which can happen during the beginning, middle or end of the swing in question. An aimed swing stays effective throughout the entire swing animation because it points the saber at the opponent at all times. Although this can potentially amplify the damage of the swing, the primary objective of aiming is not to deal damage but to hit the opponent with the help of precise and careful movement of the mouse.

Because aiming requires more effort to execute properly than wiggling and is not primarily concerned with the damage output of the swing, it is nowadays much less common if at all used in competitive play. In fact, although the technique in itself is less competitive than the available alternatives, especially when faced with opponents who wiggle, some players and teams who specialized in aiming have nonetheless been competitively very successful in JKA, most notably such teams as the Jedi Academy Aurochs and players like Master P!ng.

Whereas aiming can be considered the tempered, refined and precise version of wiggling, the spin can be found at the opposite end of the extreme. The spin is exactly that: a very fast saber movement that aims at spinning the character during a swing by at least 360 degrees. Spinning gives up what little claim wiggling had to 'aiming the saber at the opponent' and replaces it with pure damage output. Due to the very high velocity of the swing, spinning deals a great amount of damage and has the potential to hit the opponent multiple times with the same swing, oftentimes killing him instantly. As is the case with wiggling, the spin is effective in all saber stances and with all swings, but most notably so with the red stance due to the range of its swings.

However, the major downside to the spin is that the spinning player's character will remain predictably fixed at one spot during the entire swing animation, making it an easy target for counters and potentially even disorienting the player. Spinning is therefore most useful when the opponent is already in the range of one's swing with little to no opportunity for escape.

Ever since the discovery of the wiggle in late 2003, the term 'poke' has emerged and has turned into a spectre of confusion. The term 'poke' was originally used by players aXiom][Ðureal and eSe][Ðark (not to be confused with o3Dark aka The ThinG) to refer to wiggled swings, which they had discovered during practice sessions with one another and consequently introduced into the ESL. Back then, the ESL ladders were dominated by staffers because nobody could figure out a way to effectively check the power and speed of the staff with a single saber. This changed dramatically with the discovery of the wiggle, as it empowered single saberists and made it possible for them to challenge the supremacy of the staff on the ladders. The reason why Ðureal and Dark opted to name the technique of wiggling your swings 'poke' was because their 2on2 team on ESL was named Pokémon. (source)

Thus the term 'poke' originated from the word 'pokémon' and was initially pronounced with a stressed final syllable (poh-kay), unlike the english verb 'to poke' (pohk). As the technique spread across the community, so did the term 'poke', but because the source and pronunciation of the term have become lost, english speakers have started associating the term with the verb 'to poke' in both pronunciation and meaning - however, even though there was never a question within the competitive community as to what the term 'poke' refered to, namely to wiggle, most players outside of said community started associating 'poking' with the technique of aiming the saber at the opponent because of the way aiming resembled a 'poking' motion done with the saber. This resulted in a great deal of confusion, as most competitive players rightly refered to wiggle as 'poke' but most non-competitive players misunderstood it to mean both wiggle as well as aim.