Luke Skywalker is the main character in the Original Trilogy of Star Wars, and is one of the characters in Jedi Outcast and Jedi Academy, where he often takes the role of a mentor and an ally of Kyle Katarn and Jaden Korr.

Raised on Tatooine by Owen and Beru Lars, Luke Skywalker is the son of Anakin Skywalker, the infamous Dark Lord of the Sith Darth Vader. He is also the last of the Jedi Knights taught in the tradition of the Old Republic, having learned from both Obi-Wan Kenobi and Jedi Master Yoda. Luke proved to be a pivotal player for the Rebel Alliance in their war against the Empire by destroying the first Death Star.

After the New Republic struggled in vain for more than a decade to consolidate their political hold on the galaxy, Luke went before the Chief of State Mon Mothma to ask her permission to bring back the Jedi Order. With the support of the New Republic, Luke established his Jedi Academy in the abandoned Rebel base on Yavin 4. Through this process of creating a new order of Jedi Knights, Luke hoped to create a learning center to reform the Jedi way and help bring peace to the galaxy.

Sensing the power and goodness in Kyle Katarn, Luke has never given up on his hope of seeing Katarn embrace the light side of the Force and fulfill his training at the Academy.

After the first encounter with the Dark Jedi Desann, Kyle wants to regain his former Jedi powers, for which he uses the Valley of the Jedi. Luke is ready to return the saber, but only after Kyle passes the trials in the Academy. After Kyle passes all the tests, Luke tells him, that nobody expected Katarn to pass the trials so easily, which meant he used the Valley of Jedi powers. He also says, that he is aware of Desann's problem and that at one point the Chistori was a student on Yavin 4. However he killed a fellow student and escaped.

Luke gives the hint, that some criminals on Nar Shaddaa have dealing with the Remnant forces and that might lead Kyle to Desann. He offers Katarn on of the Academy starships to keep Raven's Claw safe on Yavin 4.

Kyle meets Luke Skywalker again, when he arrives at the Imperial installation in the Leniko belt after a duel with Tavion on Bespin. Not only can they find Desann now, but also rescue Jan Ors, who was believed to have been killed by the Dark Jedi on Artus Prime. Together the two Jedi engage in a duel with several Reborn warriors, who, according to Luke, can use the Force and wield a lightsaber, but lacked discipline.

Upon arriving on the Doomgiver, an Imperial vessel, leaving the base, Kyle sees Luke fighting Desann on the ramp. The Dark Jedi manages to trick Skywalker and escape however.

Much later the Jedi Academy on Yavin 4 would be attacked by the forces of Desann and Galak Fyyar. It is not known, where was Luke at that moment, but most likely he was aiding other Jedi fighting back the Remnant, while Kyle followed Desann into the catacombs. After the latter's demise at the hands of Katarn, Luke would meet with Kyle and Jan in the main hall of the Academy. He thanks them both for the help in the crisis and invites the former Rebel agent to join the academy as a Jedi Knight. 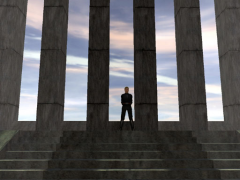 Luke Skywalker is introduced in the very first mission of the game, when an academy shuttle crashes in the jungle after a diversion from the Disciples of Ragnos. He tries to contact the group via holocom, while a certain Dark Jedi sneaks into his room to steal valuable data from his personal records. Luke learns of this intrusion after he and Kyle find the Jedi students near Massassii ruins, where a group of three strange people was spotted prior.

Later one the Jedi Master welcomes all the newcomers in the Jedi Praxeum, describing the learning process and assigning each student to a master. As there are still only a few notable Jedi, a few Padawans begin their training under older mentor. In case of Kyle Katarn, Luke assigns Jaden Korr and Rosh Penin, while Raltharan became the student of Corran Horn.

Quite often Luke would be the one commenting upon the success of Jaden in various Jedi Missions. As the investigation into the intrusion continued, it is revealed, that the Disciples of Ragnos are conspiring with the Remnant, and in many cases they are responsible for the attacks around the Galaxy. Luke would have his theory on the cult, that the organization is trying to achieve their sinister plans with the help of a Sith spirit. 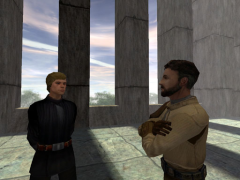 Luke discusses with Kyle Katarn the threat of the Disciples of Ragnos.

The results of the Jedi training and Light/Dark Side affiliation would be of constant attention of the Jedi Master as well. However this wouldn't prevent one of the students - Rosh Penin - to follow the Dark path. He would be found later by Jaden and Kyle on Vjun, where they would learn the truth and meet Tavion Axmis, the real leader of the cult.

In the end Luke would summon all the Jedi to begin their operation to Korriban, a Sith cemetery world, where Tavion planned to resurrect Marka Ragnos with a Sith scepter, empowered by the Force from different locations such as Dagobah, Hoth, Chandrilla and many others. Kyle and his student would join the main group later - after rescuing Rosh. However it is Jaden Korr who enters the tomb of Marka Ragnos and eventually defeats Tavion, as well as her possessed body aka Sith Lord, ending the threat of the Disciples forever.

Luke would praise the efforts of Kyle's student, who proved himself to be a worthy member of the newly formed Jedi Order.

Luke Skywalker is perhaps the most iconic character in Star Wars and is seen or mentioned in thousands of different stories. Since his first appearance in A New Hope, Luke has made a great step further from an ordinary farm boy from Tatooine to a Jedi knight and later - a Jedi Master. His story is best seen in the movies, but also developed over years in many books, short novels, comics and video games. In JKA series Luke appears in JO and JA, but previously the Players would meet him in Shadows of the Empire video game, and even get a chance to play as the young Jedi in a bonus mission for Mysteries of the Sith, an official add-on for Dark Forces II video game.

Luke has become quite popular in JKA since his appearance in JO. A lot of reskins were made to show the character in different clothes and of different age. Such mods as KOTF allowed the Players to relive some of his adventures in classic films, while some showed a completely new story about him and his friends.

Several people made a resin of the original JA model (which differed from JO a bit), as well as made a very new one to look more like Mark Hamill in Episode VI (and EU). With the release of Episode VII, a new model of a much older Luke Skywalker in a beige hood was developed specifically for JA.