Jedi Knight Galaxies (formerly known as JKA Galaxies) aims at being a large multiplayer online roleplaying game (LMORPG) based off of Jedi Academy. Originally, the mod was to be similar to Star Wars Galaxies, but the design was changed significantly due to personal tastes and the existing style of Jedi Academy. Due to the massive set of features in the mod, it was decided that the mod was to be split up into 4 Phases, each building up on the previous phase. The first phase, Versus, was released on September 17th, 2012, and is still actively in development. The second phase, which will contain the previous phase as a faction event, will feature sandbox gameplay on Tatooine and try to focus on team aspects to keep the players interacting.

Jedi Knight Galaxies was open-sourced with the hope that it would be useful to new programmers, and to help maintain feature transparency with the community.

Originally titled JKA Galaxies, the mod was under development with members of Terran Gaming (who would eventually rename to Terran Gaming and run a large game media site), BobaFett (developer of the highly praised Ultra Utility), DeathSpike and Sith-J-Cull as their high ranking crew. None of the original developers still work on the mod, with the exception of Jake, who simultaneously runs the Terran Gaming site, and provides web assets and additional support to the team. The exact estimate of when the project began is not entirely clear, but some report it to be as far back as 2005, with some small-time assets being developed. These assets for the most part didn't make it into the final game however.

Several notable theories and breakthroughs were developed during this time, such as pixel shaders and Lua scripting which would form a lot of the internal anatomy. Despite the 64 player cap being broken at this time, it turned out that 127 players were actually possible on one map without further reverse engineering. Due to its elaborate and innovative measures in reverse engineering, the team received the motto "Where we break the limits!". The motto continues to be in use today.

Some of the smaller maps and most of the large maps ran with poor framerates. This was not ideal in an large multiplayer environment with 64 players per server. When confronted by other members of the team about the possibly of improving the maps' optimization using hinting or areaportalling, Sith-J-Cull reportedly became irritable and an altercation ensued. The conflict resulted in Sith-J-Cull leaving the team, and all assets made by him pulled from the game.

After the disagreement, the decision was made to drop the name JKA Galaxies, and rename to JKGalaxies. Following the name, work on the launcher began. The launcher is based mostly off of networking with the "host site", which was originally JKGalaxies.com (now Terran Gaming). The host site was also to become an elaborate master server, but this was dropped post-launch in favor of a more natural-to-Quake 3 approach. The host site would change twice prior to the release, causing several delays. Chinese and Russian hackers also bogged down the development of the launcher by installing redirect scripts on the main page, causing a large community scare.

Further developments and innovations were made at this point. The engine weapon limit was bypassed completely, and a new weapon system based on JSON, which was designed primarily for internal ease of use, was instated. Several security measures were added, including immunity to Q3Fill, immunity to getstatus and getchallenge DDOS, and PK3 encryption/protection, among others. Support was added for PNG screenshots, hex/RGB color codes, OGV video, and others. Content was also pumped out regularly, with a total of 80 all-new weapons being produced in a relatively short span of time, with several of the weapons being designed by the developers themselves based off of canon EU content. 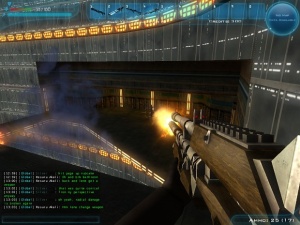 Game play from "Versus"

Unfortunately, a series of development issues and a lack of focus would prove to be the mod's downfall. After the current (at the time) leader decided to leave in order to pursue interests in Terran Gaming, leadership was split between BlasTech (the current leader) and DarthLex. Not too long afterwards, nearly every single developer quit the team, with numbers dropping as low as 4 at one point. A small period of nondevelopment ensued, until a few of the original team members rejoined, and a plan was formed, along with a temporary estimate on a release date. This plan would go on to become the Phase system. Since then, the plan has become fleshed out more in depth and a clearer goal was set.

Further development on the inventory system followed, with the lone programmer that remained working 3-4 days at a time without sleep in order to shell out the system. Since all of the original GUI designers had left the team, it was up to BlasTech to produce the shop and inventory menus. During this time, the initial September 17th release date was scheduled -- the anniversary of the main project's inception. JKHub.org did an interview with the team at this point. A lot of the programming for the launcher and shops were hastily done, and barely any testing was performed. It is believed that the game had only gone through two testing sessions, both of which were done with cheats.

When the September release date rolled around, a series of hotly contested and controversial actions took place. It is generally accepted that there were plans by Terran Gaming to delay the mod for at least a week (perhaps longer) in order to fully test the mod for bugs and benchmarking. For some reason (perhaps by a failure or breakdown in communication -- it isn't clear), the mod was not delayed, but further hyped by developers on its Facebook page.

On release day, there were enough game download requests that the Terran Gaming site crashed for over 3 hours. A number of complex issues still plagued the game at this point, one of which was a lack of a server. Several other issues (such as Terran Gaming's download limits, issues updating stemming from PK3 protection and the launcher, and several damning bugs) were noticed when users attempted to download the game. JKHub.org posted a news article which informed the community of the botched launch, and criticized the mod for not being tested as well as it should have been.

Over the months that followed, most of the issues were fixed regarding the game, but unfortunately most of the community still had a sour taste in their mouths from the bad release. The developers announced a re-launch, which was to include lightsabers and vastly improved gameplay.

Development still continues. Several new team members joined the ranks and helped develop the mod (especially in regards to programming). The launcher received updated visuals. Other features were added, such as sprinting animations and various other tweaks and improvements. Development has continued on an open beta test version of the game, called the "Public Test Realm". New features pour in consistently, including ingame internet radio, a new gametype, new maps, and vastly improved NPC AI. In addition, some features such as lightsaber combat and Flash shaders have been speculated by the community to be coming soon.

Jedi Knight Galaxies: Versus was generally well-received by the few that could play it on initial release. Despite the overall large number of bugs that plagued the game at release, players that were ingame spoke very highly of the game and praised the developers for swift action in correcting the issues. Players praised the mod for its very high-quality content, attention to detail, relatively high framerate, and well-crafted UIs. Criticisms have been directed towards the quantity of bugs, lack of lightsaber combat, similarity to Gunslinger's Academy in terms of combat (though the combat was praised), lack of servers, relative incompleteness, and steep learning curve.

The recent versions of the game have been more well-received, since the bugs are mostly handled and the serverside was released to the public. The Public Test Realm in particular was praised for the new maps and AI.

Jedi Knight Galaxies went open-source on May 18th, 2013. It continues to serve as a reference and as a means of maintaining transparency with feature additions.

A few forum members of JKHub pointed out the lack of credits to other authors, and that their readme files were inside the PK3s, but could not be extracted due to PK3 protection. This has since been corrected, and was claimed by developers to be an "unfortunate casualty of speedy development".

The game was criticized for its closed system. The developers did not initially release the serverside, for fear of private server development later on in the life cycle. In addition, the PK3 protection in place was criticized due to its insecurity (in the initial releases, due to bugs) and the inability for players to develop new content for the game. The serverside was later released, but the PK3 protection has since remained.

Various kill trackers were disabled in JKG, because they were felt as being annoying or cheats. Some have complained about this, since there is no other way to minimize the game. The developers have responded by stating that they have sought to include a chat command in the future that minimizes the game.