Jedi Knight: Mysteries of the Sith 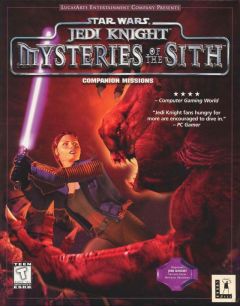 Jedi Knight: Mysteries of the Sith is a first person shooter action game released in 1998, often considered to be an official expansion pack for Dark Forces II: Jedi Knight.

It has been over five years since Jerec was defeated at the Valley of the Jedi. Kyle Katarn, continuing his pursuit of the light side of the Force, has joined the fragile New Republic in the struggle against the Empire.

To aid in their cause Kyle has traveled to a remote base in the Altyr system, accompanied by Mara Jade, a young smuggler who sought out Kyle in the hope that he might further her Jedi training.

Mara, once a powerful agent of the Emperor, was swayed from the dark path by Luke Skywalker. She now seeks knowledge of the role she will play in the continuing struggle for the galaxy...

Kyle Katarn defeated Jerec five years ago and continues his career as an agent for the New Republic. He is also a Jedi, even though he decided not to join the Jedi Academy of Luke Skywalker on Yavin IV, instead taking the path of a Jedi Adventurer. Serving on Republic base on Altyr V he is accompanied by Mara Jade, former servant of the Empire, brought to the Light Side by Luke. She believes she could learn more of the Force with Kyle, who walks an unorthodox path of learning the ways of the Jedi, just like her.

During their training Altyr V is attacked by the Imperial super weapon - two artificial asteroids hitting the base from orbit. The Republic forces are ready to engage the stormtroopers and other forces landing on the surface, often destroying the outer wall to get inside. Kyle uses his experience as a soldier and his Force powers to stop the enemy and later get into one of the asteroids. He uses the super weapon to destroy the other Imperial asteroid, setting the remaining one to self-destruct. He escapes from it just in time - minutes before its explosion.

Katarn decides to take on his own mission - to investigate some data, which the Empire seems to have tried to hide from everyone. Mara is left on Altyr V to aid the Republic forces negotiate a bargain with Ka'Pa the Hutt regarding new weapons for the Republic. Mara reluctantly agrees to take the mission only to find out, that the Hutt isn't eager to meet with a Jedi, especially after what Skywalker had done to "poor Jabba". Mara then finds an alternative way into Ka'Pa's Palace, engaging many Tuskens, Grans and Gamorreans on her way. Many more patrons stay inside and sometimes would try to kill her as well.

The Hutt accepts the Jedi after she destroys his glass roof to get into the hall. After a minor confrontation Ka'Pa then asks her to help him with his rival - Takara and send her on a mission on Katrassii spaceport, occupied by the Empire. In order to find Global Communications Transponder device in the possession of Takara, Mara has to find Abron Marr, his lieutenant. Upon chasing him to a warehouse Mara falls into a trap. After a while Mara finds herself weaponless in a prison, from where she gets into the upper level - actually a cave with a rancor, kept their by the pirates. She finds her lightsaber soon enough though and defeats the beast in order to escape Takara's stronghold.

The Republic later asks Mara to accompany a Jedi Holocron aboard a ship, which is soon attacked by Kaerobani's pirates. They steal the Jedi artifact, but Mara manages to hide in of the containers and makes her way to Rathalay as a stowaway. There she reclaims the holocron and escapes again fro, pirates and many thugs, occupying the city.

Kyle Katarn is missing and Mara decides to start her searches for him. She contacts Mon Mothma to inform her about this mission, and the Republic leader warns her to be especially careful. The searches bring the young Jedi to Dromund Kaas, a Sith world, covered in jungle and swamps. The Dark Side aura makes all weapons except for a lightsaber useless and Mara has to explore the jungle relying only on her Force powers, fighting off many different beasts such as Mailocs, Swamp Wampas and other threats. The Sith ruins on the planet is another dangerous place, holding dark secrets, deadly traps and bloodthirsty vornskrs and Sith Undead, disturbed by Jedi's presence.

Making her way through many dark hallways, corridors and tombs Mara eventually finds Kyle, who has embraced the Dark Side within these walls. The former Rebel agent wants to confront and even kill his friend in the Throne room, but seeing as Mara turns off her lightsaber and stands before him weaponless, makes Kyle reconsider his motives. He can't kill Mara and rejects the Dark Side. They then leave the temple together and fly off Dromund Kaas.

A bonus mission, which allows the Players to take the role of Luke Skywalker, is present within the archives of the game, however it requires a few manipulations in order to access it. The mission includes Cloud City, where Luke has to find and defeat Darth Vader. The mission follows most of the events of Episode V, including the legendary scene, where Luke falls from a platform down to one of the pipes, where he is later extracted by the Millennium Falcon.

MOTS was generally well-received by fans, even though the game lacked the atmosphere from Dark Forces II, especially due to the fact that the previous game had cutscenes with real actors. It is also much smaller, uses most of the materials from the original, such as textures, objects and music, while also introducing new enemies, weapons, Force powers and locations.

The ultimate fate of Kyle after MOTS is unknown - some books and stories suggested he left the Jedi way, returning to his mercenary life with Jan Ors. The subsequent game Jedi Outcast proved this story to be true - Kyle returns as a Republic agent soon to reclaim his Force powers to become a real Jedi Knight much later.

Dromund Kaas, seen in last missions of MOTS, was later reintroduced in Clone Wars story and as huge location for the Players of Star Wars: The Old Republic, revealed to be the capital of the Old Sith Empire. By the times of Palpatine only some ruins of former glory remain on the surface.

A group of fans tried to recreate the mod on Jedi Academy, however the project was cancelled after a few years in development.