Star Wars Jedi Knight: Jedi Academy is a game released on September 17th 2003 for Microsoft Windows, Xbox, GameCube and macOS, developed by Raven Software, published by LucasArts and Activision. It is the sequel to Jedi Knight II: Jedi Outcast, which was released on March 26th 2002. Unlike its predecessors, the players get to play as Jaden Korr, Kyle Katarn's student.

Ten years after the Battle of Endor, the Imperial Remnant continues to be driven back by the New Republic, forcing the Imperials to adopt increasingly desperate tactics in the ongoing struggle.

Meanwhile, Jedi Master Luke Skywalker moves to restore the Jedi to their formal place as peacekeepers of the galaxy at his Jedi Academy on Yavin 4.

Jaden Korr, a promising student from Coruscant, is en route to the Academy after achieving the impossible: creating a lightsaber without any formal Jedi training....

Two years passed since the defeat of Desann and his followers on Yavin 4. Kyle Katarn is now a Jedi Master at the Academy established by Luke Skywalker after the fall of the Galactic Empire. 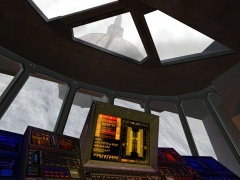 Hoth Rebel Base during the crisis.

A transport with new students arrive on Yavin 4, among these are Jaden Korr and Rosh Penin, two young Force sensitive individuals hoping to join the Jedi Order. However, the ship crash-lands not far from the old Massassi temple, where the two students make their way only to encounter a stormtrooper in the jungle, as well as a mysterious warrior with a lightsaber. Jaden then proceeds to explore the ruins, but is struck by a light beam when an unknown group tries to conduct a ritual nearby.

After these events, Luke assembles all the newcomers in the grand hall of the Academy, assigning the students to their respective Jedi Master. Both Jaden and Rosh become students to Kyle Katarn and spend the first day training in a special area of the Academy, completing various trials. During one of these, Rosh rushes to be the first in the training course, activating a saber droid to fight Jaden. Even though the young Jedi proves to be victorious, he is angry with his new friend at first.

After the training, all of the Jedi students are sent to various planets to complete different missions both for the Jedi Order and the New Republic. During these, Jaden encounters many mercenaries and Imperial Remnant troops, as well as slowly uncovers the truth behind the activities of the recently established Sith cult of Marka Ragnos. As the cultists are fought on different worlds, from Tatooine to Coruscant, it is revealed that an old foe of Katarn – Tavion - is the one plotting against the Jedi.

Jedi Academy continues and enhances most of the traditions and game elements originally introduced in Jedi Outcast with the Quake III game engine. The developers improved the game mechanics and added a variety of options to players, such as character customization, lightsabers and gameplay styles. New Force powers were also added, as well as new weapons and the ability to drive vehicles. The game allows the player to complete over a dozen missions spread around a variety of locations, some of which are featured in the Star Wars movies such as Yavin 4, Tatooine, Hoth and Coruscant.

Having many similarities with Jedi Outcast, Jedi Academy sparkled a great interest by fans in the mod community.