The Dark Pastime is a fan-made modification for the Jedi Academy video game, continuing the adventures of Kyle Katarn, the protagonist of the Jedi Knight series. The story is set approximately three years after the events in the original games, and 14 years after Battle of Endor (i.e. in 17 ABY). The Player once again takes the role of Kyle.

After the destruction of the Cult of Marka Ragnos and the victory of the Jedi on Korriban, the New Republic entered the era of relative peace. Various conflicts still take place, but the former Galactic Empire is weakened and seems to have calmed down, limiting its operations to a few remote Galactic regions. The Jedi Order, established by Luke Skywalker, continues to take in new students and often assists the Republic and local planetary governments in various missions across the Galaxy.

However one of the recent events – the mysterious slaughter on the Republic-controlled world of Goura - changes the situation and brings in another dark mark. Many believe this is an attack from the Imperial Remnant forces, planning to instigate another conflict. The New Republic Intelligence begin their investigation into the troublesome case, searching for the possible attacker, who is believed to have destroyed the Republic outpost and killed all personnel with an unknown weapon. The remaining evidence suggests it was an Imperial dreadnaught, which secretly patrolling the Goura sector right before the incident, possible being responsible for the tragedy itself. After days of thorough investigation the Republic asks the Jedi to assist the fleet in capturing the Imperial vessel, which is heading to Ord Mantell.

The only one, who knows the truth about Goura is the captain of the dreadnaught, who is eager enough to escape and hide the secret. An even larger set of data is believed to be stored in the secret archive on the Imperial world of Dvorn, where Kyle Katarn takes his second mission. (Chapter I)

After many encounters with the Empire, the Jedi is tasked to make a contact with the Areem corporation executive on Anarmar. Even though the planet is neutral in Galactic affairs, and the company has legal dealings only, the Republic suspects the Areem to have business with some of the Imperial activists. (Chapter II) After the mission on this water world, Kyle has two more missions, one being from Luke Skywalker himself.

The Mission to Ord Mantell is the starting point for the investigation by Kyle Katarn. This is a subplot involving the Imperial forces, however after some time new players arise on the arena, and the Jedi have to take into account, that this is not a familiar war between the Empire and the Rebellion, but a much larger conflict, involving high-ranking officials from different worlds, criminal gangs, corporations, clans and even ancient civilisations. The plot takes the main character to visit such familiar locations as Yavin IV, Dantooine, Sulon and completely new planets – Dvorn, as well as Anarmar, Tuak'Khan, Shiib and Uffel, most of which are with a unique story and enemy fractions. 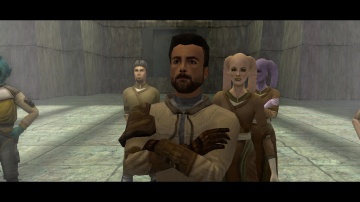 Currently only the main characters and some of the antagonists

Several planets were confirmed for the mod, including Dantooine, Sulon, Ord Mantell, Yavin IV and Coruscant, as well as new locations such as Rutana, Anarmar, Uffel, Tuak'Khan, Dvorn and Shiib.

Anarmar was the first planet to be introduced, and the first to be changed significantly.

The idea to create a mod came from Wuhan, when he brought several PC magazines to Number Wan, which contained the materials for then popular Jedi Outcast video game. Usually these were game CDs including new maps, models and skins for the Multiplayer, as well as some rare Single Player mods for various games. It was then decided to recreate the plot of Episode I: The Phantom Menace from scratch, with much attention paid to level design accuracy and story. The first attempts of Number Wan were originally made with the Worldcraft level editor for Half-Life (1), which also used *.map format. Some days after first try-outs the work was continued with GtkRadiant, where such maps as the city of Theed and the Trade Federation ship were made.

Several months later Number Wan thought of making a completely new story, not based on any of the exisiting films, but rather introducing the new adventures of Kyle Katarn. The original story/script of the mod, that would be called The Dark Pastime was written by Number Wan in Summer of 2004, and further developed by the beginning of 2005 together with Wuhan. It was then decided, that the new adventure would bring the Player to such planets as Danuta, Dantooine, Sulon and many others, originally seen in a variety of Star Wars stories. There were many limitations however, as the newly formed team, which from now on called itself Vigilant Art Group, knew absolutely nothing about modelling, skinning, scripting, and had only a few skills in mapping and voice-acting. The latter was possible, when a new member – TheNamelessOne joined the team and participated in voicing the majority of the characters in DP. He also became a mapper and a scripter for some time until completely devoting himself to voice-acting. The process moved faster, when Paradamus joined the team to provide the voice of Kyle Katarn.

As the time passed, the whole concept of the mod changed, when Number Wan started making new textures and maps, adding new characters and details into the plot and design. It was later decided upon some discussion to move the whole project from Jedi Outcast to a more advanced game engine of Jedi Academy, which already had quite the potential in terms of storytelling, gameplay and fan-friendly opportunities of changing the gameplay. But even back then the team still lacked a lot of necessary skills, not fully understanding the game engine, the script creation, as well as ignoring such aspects as making new models, high quality textures and shaders. With the beginning of the cooperation with Olgo, it became possible to make as many new characters, as the story would require, and the maps  design changed to unimaginable level like never before.

After Number Wan completed his studies in the field of Graphic Design, many concepts were revised – which involved the making of more details, props and decorations for each location, redrawing all the low-res textures, as well as replacing the "borrowed" ones with original ones from VAG itself.

The Demo version of DP was released on May 1, 2008 and included two first levels – the Imperial dreadnaught and Ord Mantell junkyard.

As the mod developed, it was decided to split the story into several Chapters and parts, with each including several maps or even missions. The first Chapter is planned to include three missions (7-8 levels), set on Imperial dreadnaught, on Ord Mantell and Dvorn, with Chapter II introducing the mission to Anarmar. Other planets are to be included in Chapter III and IV.

Chapter I was released in 2019, with early access to some of the fans in order to test it back in October-November, while the public link for download became available on December 29, 2019. It was planned to release Chapter I in November, but final testing revealed the necessity of a few changes to the mod.

The original team of modders comprised only of three people: Wuhan, Number Wan and Namelessone. At one point various other people also joined the project, though not fully involved in the VAG activities, but rather making specific tasks - PSS (scripting), Paradamus (voice-acting), Rage (some of the Imperial maps), Kyr (the last map in the mod), etc. Olgo became one of the most valuable members after showing her works regarding the Dark Forces project, which was a personal work of hew own for Jedi Academy. She became a mapper and modeller at the same time. In 2015 the Iron Sound studio offered their help in making additional voices for DP. 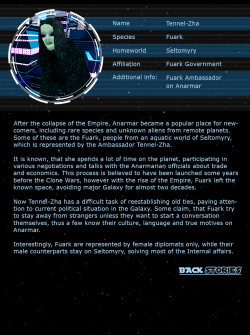 Each character got their own mini-biography in DP Backstories.

The Dark Pastime is a a classic adventure, set in JK/SW universe with familiar gameplay and new story, with over 10 planets (ancient worlds and modern ones) to explore, including 7 beautiful cities and towns with their distinctive inhabitants. The main plot involves the elements of first-person shooter in several instances, as well as an original Jedi adventure, which requires to use a lightsaber and the Force both for dueliing and solving puzzles. The Imperial Remnant, the Dark Jedi, the bounty hunters are no longer the only ones hunting you down, but the trio is accompanied by several less known factions and local organisations, each with their own motives. Besides these, the enemies now include a variety of droids, mysterious creatures and blood-thirsty beasts, occupying a few worlds. In total the game counts more than 100 new NPCs (neutrals and allies) and over 25 new enemies. In many cases both main and background characters got their own biography, tying their personal story to the main plot, in some cases giving hints to the Player of just for fun. The missions are no longer about fighting and collecting items, but also include reconnaissance, investigation of a murder, "negotiating" with the officials of high rank, taking care of crazy scientist, exploration of the ancient tombs and dungeons and others.

From the very start it was decided, that The Dark Pastime would include dozens of references and easter-eggs, involving other Star Wars stories, such as Dark Forces II, Shadows of the Empire, Galactic battlegrounds and many other games, books, comics, etc. Over time the list of all the cameos and nods became so large, that it included controversial facts from the Star Wars lore, as well as certain phenomena from outside the franchise.

Currently the mod takes into consideration most of the known Star Wars stories, both from the OT, the prequels and Expanded Universe. With the defacto reboot of the franchise, it was decided, that the mod would be based upon the principle "whatever happened – happened", giving light both to Legends and Canon stories to be combined in one legacy, with the major preference to the old Canon stories of Star Wars, given the fact, that Dark Forces series as well as Kyle Katarn were mostly part of the old Star Wars lore.