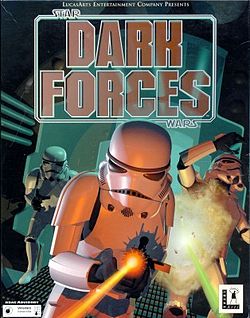 Dark Forces is a first person shooter action game released in February 1995. Set before and after the events of Episode IV: A New Hope the game tells the story of a Rebel agent Kyle Katarn. The game would become the first in long series of many other adventures of Kyle, setting the base for the sequels such as Dark Forces II: Jedi Knight, Mysteries of the Sith, Jedi Knight II: Jedi Outcast and Jedi Academy.

The New Order of the Empire stretches its evil clutches across the galaxy, consuming planets with devastating results. Through many struggles, the Rebel Alliance has learned of a new Imperial battle station, the Death Star, with enough power to destroy an entire planet.

Unable to acquire the plans to the deadly space station, the Rebels have employed the skills of Kyle Katarn. Known to most as a mercenary for hire, Katarn is a rogue figure who has a partial alliance with the Rebels.

Armed only with a blaster pistol and an intimate knowledge of Imperial methods, Kyle prepares to infiltrate the Imperial base where the plans are kept...

Kyle Katarn, a former stormtrooper, is an agent for hire, who takes upon a mission from the Rebel Alliance to steal plans for a super weapon, created by the Empire. The data is well guarded in the secret Imperial base on Danuta. Kyle manages to infiltrate the base and steal the planes, which are revealed to include the schematics for the Death Star, which are later resent to princess Leia Organa.

Mon Mothma, the Rebel leader, asks Kyle for help, when the Empire uses a very different unusual weapon to destroy the Tak base on Talay. The attack was swift and the whole settlement was turned into ruins within minutes. Only a small message from a Mon Calamari rebel comes through, which urges Kyle to investigate the massacre. He is taken to the burnt city on Talay by Jan Ors, a Rebel pilot, who actually persuaded Kyle to fight for their cause.

The destroyed city is occupied by stormtroopers and other Imperials, who secure the Rebel base after all the personnel is killed. At the base Kyle finds the remains of a strange weapon, probably used by the new generation of stormtroopers in the Empire. These are revealed to be the personal project of general Rom Mohc, a Clone Wars veteran, loyal to the Empire. Even Darth Vader himself shows much interest in these Dark Troopers, soldiers with enhanced armor and strength. 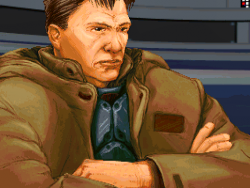 Kyle Katarn on a briefing.

Kyle investigates the Dark Trooper project, taking several missions to different planets, including the Imperial Centre and Nar Shaddaa. It is further revealed, that the Dark Trooper has come through several phases, each stronger than the previous one. The third and the most dangerous one is used by Rom Mohc himself as a exoskeleton to battle Kyle Katarn. However the general is killed and the projects is cancelled soon after the destruction of the Death Star.

By 1995 the fans had already tried very different games, set in Star Wars Universe, such as X-WIng and TIE Fighter, but a very different game - DOOM, developed by id Software in 1993, was especially popular in gaming community. Lucasarts decided to make their own game with similar gameplay, set during Episode IV, thus introducing a new game engine (in many terms more advanced than those of other games of the time), which allowed a more complex architecture and level design. The game however didn't have a Multiplayer.

Critics praised the game for introducing a well designed layout of the Imperial bases, which often reminded the images of locations from films, such as mines, military bases, Star Destroyer interiors, Jabba the Hutt's ship, Imperial Centre and many others. 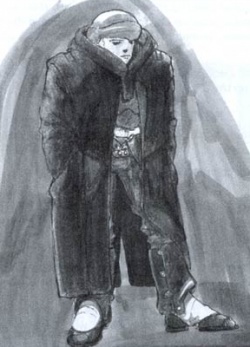 Dark Forces introduced a very new character to Star Wars, which instantly became one of the most favorite ones by fans in the Expanded Universe. The popularity of the game and high ratings made it possible for many novels and books, as well as a sequel - Dark Forces II to be released soon as well. Many expected a character with a lightsaber, so Kyle Katarn becomes a Jedi in the next installment of the series. Several more games would then follow, showing Kyle both as a mercenary and a Jedi Master much later. The protagonist himself became iconic and even received an action figure appearance.

Some elements from the JK series were later seen in other stories: Kyle Katarn is seen in several more games such as Lethal Alliance and Empire at War. His ship, Moldy Crow, also gets an entrance at the official databank, sometimes introduced in other games too. Dark Troopers return in Battlefront games as a playable unit for the Empire (retconned to be a different phase of the project), as well as being seen in Empire at War on Coruscant.

With the acquisition of Star Wars by Disney in 2012 the fate of many stories within the Expanded Universe seemed unclear, and with the announcement of the new trilogy the majority of older materials released before April 2014 were deemed non-canon, thus labeling Dark Forces and other JKA stories as Star Wars Legends, which will be ignored during the creation of the later stories for Star Wars. In later months it proved not to be entirely true, as some elements such as Dark Trooper were reintroduced back into canon with the release of a new game Star Wars: Commander, as well as expected to return in Season 3 of Star Wars: Rebels TV series in 2016.

The very operation to Danuta is not just part of Legends, but almost directly contradicts the story of the Rogue One movie (2016), which shows the operation to steal the Death Star plans by a Rebel group, called Rogue One, led by Jyn Erso, a new character in Star Wars. She and several of her companions have been compared to Kyle and Jan Ors since the release of the promo materials. Interestingly, some elements from JK series have already been re-used in several new novels and even appear in Rogue One as well. The new story suggests, that the plans were kept in a secret archive, kept on the planet of Scarif, where Rebels won their first major battle against the Empire, as mentioned in A New Hope text crawl.