Communication Force was an unofficial Single Player modification for Jedi Outcast, created by a Russian team - Nazar Design Group. Presumably it was the first of the large mods to include a dozen of missions in one pack, as well as voice acting.

CF presents an adventure of the young Jedi student of Luke Skywalker, who is fighting against one of the cells of the former Galactic Empire. While the Emperor is already dead, a few in the Remnant forces plan to strike again the weakened New Republic through a complex conspiracy. The consequences of their shadow operations begin to tore the former Rebel alliance apart, when its soldiers are attacked on an unknown world while on a scavenge mission. The wrong data, provided by the Republic general, leaves the whole squad dead, with the Empire gaining higher ground.

Days later the general stands trial on Coruscant, when the Imperials suddenly attack the capital. The former Republic military is then taken away by an unknown hooded person, while the Imperial forces kill everyone in the court, including the judge and other citizens. The dire situation makes Luke Skywalker send his own student to investigate the case in hope of finding the general, who is presumably held at the Imperial prison. The Jedi takes a ship Tuckermeet of the Trade Federation to get there, but is promptly asked by the captain to keep his lightsaber in the cargo hold, as weapons are now allowed there. The vessel is later attacked by the Imperials and all its passengers need to evacuate.

On the Imperial planet the Jedi Student fights his way through the legions of stormtroopers and eventually finds the prison cell with the General. The latter reveals, that the Republic squad died because of the intense communication disruption. While he could listen to his comrades, the soldiers wouldn't know, that the reconnaissance data was wrong. While escaping the prison, the general is recaptured by the security system near the exit and is eliminated in instance by a laser trap.

The Jedi student lands on the planet, just recently occupied by the Empire (presumably Coruscant) in order to meet with the CF Corporation executive, who might have information on latest disruptions of the communications in the Galaxy. A group of Reborn warriors as well as stormtroopers try to stop the protagonist, as well as plan to storm the corporate HQ in order to eliminate any witness. When the path is clear, the Player is greeted by the executive, explaining, that the CF corporation is responsible for 67% of Galactic communications in the Core worlds and over 80% in the Outer Rim territories, that is why the Empire decided to hold its grip over the company despite its neutrality and relative independence even during the reign of Palpatine. 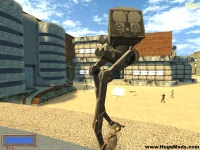 The executive then asks the Jedi for help - to investigate the warehouses on El-Tokka planet as well as finding the whereabouts of the missing CF technical specialist. His knowledge and experience present a valuable source of information and could be exploited for malicious activities should it fall into the wrong hands, and that's what makes the CF corporation feel nervous. It was anticipated, that the communication would be disrupted, but this never happened, and the company expects something more sinister to happen soon. The Jedi recaptures the warehouse and then fights against the arriving Imperials.

The protagonist is then sent to a secret Imperial Industrail complex, where he meets a Rebel agent in a worker disguise after naming the password "One-eyed Tsiss must get blind". It is revealed, that while the Remnant are preparing their forces, there was also a conflict with the local crime lord by the name of Tsiss, who betrayed them, and as a reprisal for that the Empire flooded his village with toxic wastes from the factory. Tsiss later reveals the nature of his cooperation with the Empire, which is operating from their military base beneath the old (presumably Sith) graveyard. The area is heavily guarded by stormtroopers and AT-STs, as well as Reborn warriors, which are the real mastermind behind the underground machine, which caused the disruptions of the communications throughout the Galaxy.

While the Jedi student manages to defeat the Reborn, he fails to stop the machine from sending counterfeit messages, which might just bring chaos upon the civilization. Believed by others to be a traitor, the Jedi destroys the entire installation for good.

Communication Force mod was released in 2003 as a separate non-official modification for Jedi Outcast and momentarily raised a lot of enthusiasm among JK fans and in the modding community of www.jediknight.ru. The project was so popular, that some members of the Nazar Design team were asked for an interview to reveal some of the details of CF. While most of the textures were taken from JO base, certain shaders, as well as many scripts, maps, level design and story were a pure creation of the team. For the creation of the maps, the game designers used the Quark editor instead of GTKRadiant. 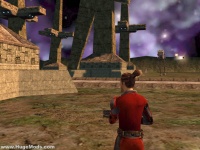 Jedi Student at the Old Graveyard.

In later years some fans complained, that the mod offered too little diversity compared to original JO, and the team released a patch, which fixed some bugs and changed the appearance of the protagonist, as well as added some other alterations to the game.

The mod was positively received by most of the fans in 2003 and was played even some years later. With the release of the second modification by Nazar Design Group in 2004, Lady Jedi, CF was somehow forgotten by larger community. With the anticipated Jedi Academy game and newer mods for the sequel, CF became even a more rare thing to be found.