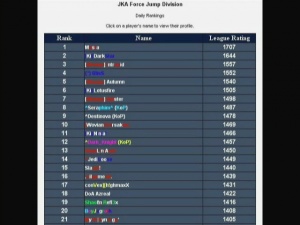 A screenshot of the BWN ladder taken from early 2005.

The Bladeworks Network (BWN) was an online gaming network designed to govern and manage Duel Mode servers. Their goal was to enhance the JKA gaming experience by providing accurate player ranking, profiling, and a central location for competition and collaboration between JKA players in Duel Mode. To do this, the Bladeworks servers ran blademod to send duel results to a central server for recording. From those results statistics are made for each registered fighter and server. BWN was ran solely on American servers from late 2003 by Darkstar, Moria, and SiNiStaR till about late 2006 when the system was abandoned for various reasons.

The BWN's competitive nature attracted some of the best fighters from within the US. However, servers themselves were very unregulated and so players would be prone to abuse or hostility. The American competitive scene was very informal prior to the release of BWN, so the rating system provided by BWN became the focus of many fighters in JKA and served as a competitive outlet for the American scene as a whole - despite all of that, it failed to provide the necessary rigour and organization required for competitive cross-server play to truly flourish.

While the actual algorithm used by the BWN was probably only known by Moria, it is very easy to assume how it works. Players start with a rating of 1250. Until they have completed 5 fights againist registered fighters, their scores are "provisional". Despite the inability to see one's score during this period, the fighter is being scored and his rating is being adjusted. How many points one gains or loses per round depends on the difference between the two fighters ratings. If a lower rated fighter defeats a higher rated fighter, he will gain many points. If a highly rated fighter beats a lowly rated fighter, he will gain only a few points. The fewest number of points that can be exchanged is 2 and the highest is 32. Each fighter's rating is compiled from the statistics of their last 500 rated duels. The BWN system keeps track of players by their in-game name and matches it to the one registered in the database.

The BWN system has been criticized as trivial at best for not accurately reflecting the true abilities of the players. It is easily subject to abuse and poor reporting. Since fighters are identified only by their player name, there is nothing to stop another player from fighting under a different name already registered on the ladder. A common problem on the BWN therefore is known as "stat whoring": where someone destroys another's score by playing under their name. Also it is very easy for someone to "rig" the scores by fixing matches with another registered player. Fighters can mid-way through a match choose whether they want to be rated or not by changing their name through a bind. They will almost always choose to be rated when it favors them. Fighting for rating on the BWN is still entertaining, but no one should consider those numbers to carry any weight.

In 2007, there has been some hype about a revision to the Bladeworks system called BWN2. It is supposed to address many of the common problems the BWN has had and make it a much better system. Unfortunately, even back then there was little evidence to show that BWN2 would ever become a reality. Some new map concepts have surfaced, but no proof of a new scoring system or blademod have been seen and the project ultimately failed to get off the ground. A year later in mid-2008 Intrepid would set out to code a mod very similar to the original BWN called Sabermetrix, which was well received for a while but very short lived - the last Sabermetrix server went offline sometime in January 2009.