Artus Prime is a New Republic mining colony, recaptured by the Remnant forces during the Desann crisis. Kyle Katarn visited this planet after completing his mission on Kejim. 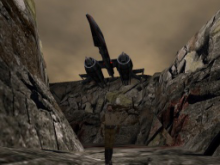 After Jan leaves in Raven's Claw, Kyle has to get to the Mining facility, which belonged to the New Republic, but was recaptured by the Empire in order to get Artusian crystals for their experiments. While exploring the area, Kyle would find the miners, who were taken prisoners by the Remnant in order to become test subjects in the experiments with the crystals, which were used in order to infuse the Force into the living beings. Most of them were kept in the prison cells complex, but after being freed most of the miners helped Katarn fight off the remaining Imperial forces.

The battle would continue outside the facility as well, with AT-STs attacking the Rebel forces, while X-Wing star fighters engaged Imperial TIEs in the sky. The Imperials also used the local ground canons to stop the New Republic forces, but these were neutralized by Katarn. After that Jan Ors was able to land in a nearby yard to pick up Kyle, but suddenly disappeared from the comlink.

Kyle then rushes to Raven's Claw, where he encounters Desann, a Dark Jedi, responsible for the experiments on Kejim. His apprentice Tavion takes Jan Ors prisoner aboard the shuttle and has her executed, as Desann commands. Katarn tries to fight the fallen Jedi, but the chistori proves to be too powerful to be stopped with a single blaster. Beaten and angry upon his friend's death, Kyle forgets his promises and rushes to Ruusan to get powers from the Valley of the Jedi.

Just like Kejim in Kejim Post, Artus Prime is a rocky planet with dark skies and a dirty industrial complex, close in design to Imperial style. The whole building is cute crude with several blocks and multiple corridors, including the ones, made through the rocky tunnels which were home to local pests - the mining bugs. Artus Prime is only seen in Jedi Outcast.